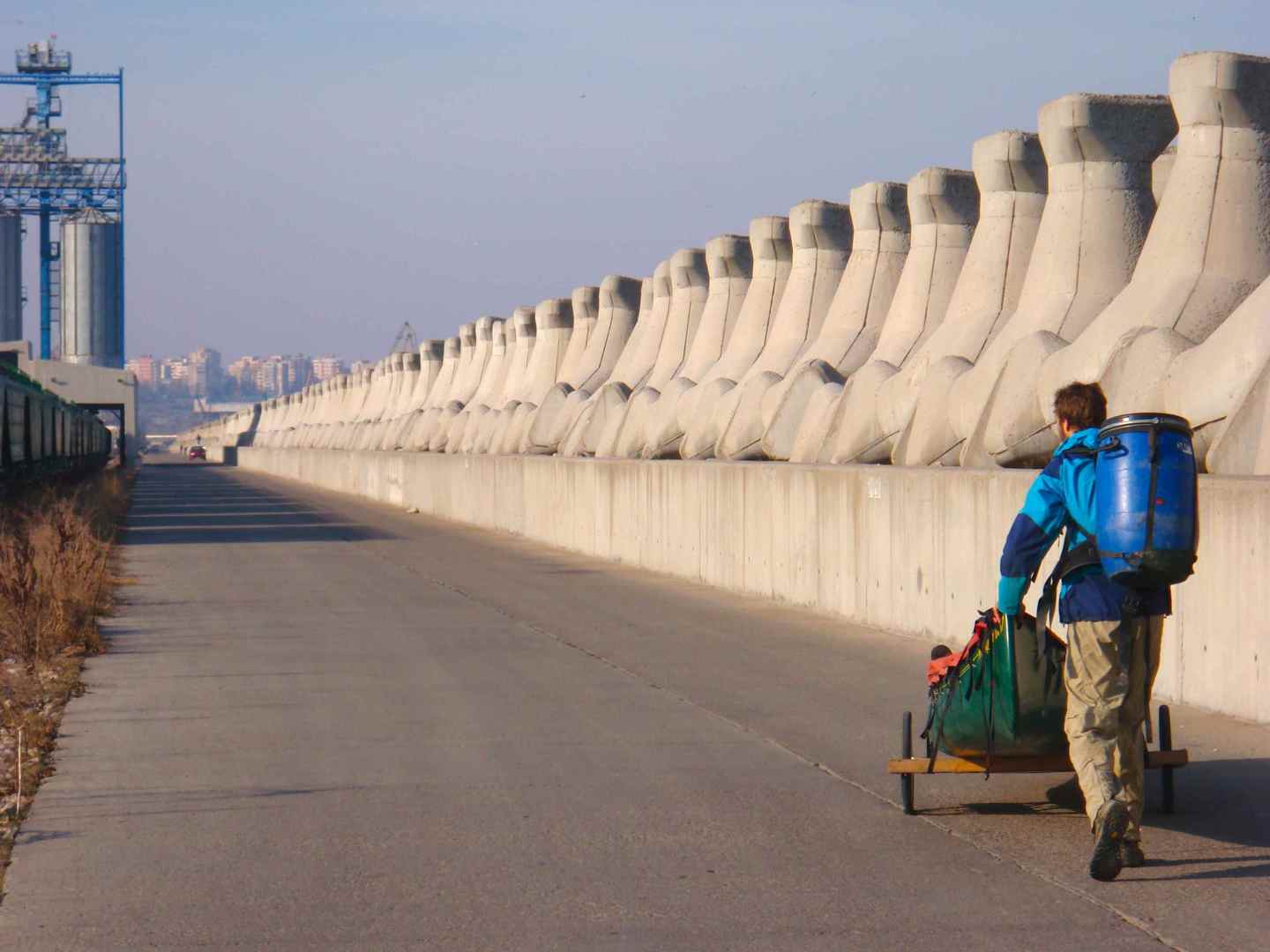 Walking the promenade at dusk, the deepening red-purple of the Black Sea horizon acts much like the coals of a fire. It glows, certainly, but is also irresistible to the eye and evokes an elemental satisfaction. It is proof, not quite sunk in, that we have reached the sea and tomorrow will be just another day.

Surreal flashbacks roll past: the stove flickering in the gathering darkness of Romanian steppe-land; a far-off train clicking over a box-girder bridge. It is the night before the Sea, and in the moment when colors cease finally to define themselves against one another, I pull on my suit of armor. The last fleece and scarf, plus mountaineering mittens, rain gear and parka are the last accouterments that in this weather make my pack seem empty and light. We will eat, and then paddle through the night. It will be cold, as it has been.

We began the day at Cernavoda, “black water”, and will end near enough to the Black Sea that we can paddle into the salt in early morning, before the solar engine of convection has her chance to muddle our chances of a clean passage.

The Danube continues another 300 kilometers past Cernavoda, branching in its last century into one of the greatest deltas in the world. We have read about the delta, about the countless birds and rough peasant fishermen—Russian exiles—who live there. It is a UNESCO World Heritage Site and a national park. It is Europe’s largest wetland and the junction of most of the major Eurasian-Africa-Middle Eastern bird migratory routes. With winter on the march however, and with the thought of trackless channels and a 4,152-square-kilometer marsh on our minds, we had taken a right-hand turn into the Danube Black Sea Canal and thereby skipped the delta, albeit with no small disappointment.  Indeed, everyone warned us not to enter the delta without a guide, let alone charts more than six months old.

We, as many travelers before us, opt to travel through the limestone hills of the Dobruja for 60 kilometers and attain our goal in one swift, dreary shortcut. The Danube Black Sea Canal was first envisioned by the Romans, and then surveyed by the Ottomans and the Austrians. The Communist government of Romania broke ground in 1949 with the hope of easing shipping and building a massive ‘grave of the Romanian bourgeoisie’ in the dry soil. Work was abandoned and the slave camps dispersed after 10 years with the canal half done and 100,000 political dissidents, Gypsies, criminals and peasants dead and buried along its banks. It was not until the 1980s that the Communists decided to complete the project, and at enormous expense. It is colloquially referred to as the Canalul Mortii: the Canal of Death. It lives up to its name.

We paddle through the night, guessing our direction from Orion reclining on the artificial canyon walls. Beyond the last portage in early morning, the water was salt, mussels clung to the rocks and seagulls took to the air at our approach. Beyond the breakwater, the sea pulses with the minute swell of diminishing energies. At this time of the year, titanic storms batter the coastline with 20-foot waves and driving snow. As we turn our tiny canoe north, the Black Sea extends to the horizon in glassy calm before melding with the clear, cold December sky. Fortune smiles.

A flick of the blade into a gentle stern-pry swings our canoe into the pier. At Constanta, Romania, on the shores of the Black Sea, we have achieved our goal of three months work and 3,800 kilometers traveled by human power.

At last total, we have followed a half-dozen rivers and as many canals upstream across France, and so met the Rhine and left the terraqueous world to ascend into the mountains, to split the watershed of Europe and seek an Asian shore. In Germany’s Black Forest we portaged 100 kilometers through mountain passes and felt the stirring of winter’s onset. At Donaueschingen we put blade to water on the Danube: the Greek Ister, the Roman Danuvius, the German Donau, the Hungarian Duna, the Croatian Dunav, the Slovak Dunaj, Serbian Dunav, Romanian Dunarea, and the Turkish Tuna; the river of history and our companion for the next several thousand kilometers. For eight weeks we charged downstream from the source, seeking salt water as we paddled under castles, cathedrals, and medieval towns, through sheer granite canyons, mountain ranges and shockingly flat steppe, all on a on a river moving at 250,000 cfs and carrying Europe on its breast, eastward.

We walked with Paddy Leigh Fermor as he traced the Danube and visited Gypsies and princes in his great walk from the Hook of Holland to Constantinople in 1933. We argued with Claudio Magris in his aimless drift through the cultural history of Mitteleuropa, and read the histories of the Roman frontier, of Hapsburg diplomacy, Germany engineering, and the wars against the Ottomans. The Duke of Marlborough set tents in frosted grass with us in Germany, Prince Eugene lit the stove, clogged with the carbon of cheap petrol, from the Vienna woods to the dome of Eztergom as Imre Nagy’s speckled head bobbed under a portage load. Marcus Aureilus pointed us to the market in Turnu Severin and Prince John Hunyaldi to the only gas station in Tutrakan. Vlad Dracula kept a trash fire through the night to keep off the wild dogs through Wallachia, and Ovid bought our first beer in Constanta. We paddled the river of history, always in awe at the peopled histories that faded in and out of the fog.

The end of a long expedition is a dangerous time. Here, now, the seeds of the next are planted in the fertile soil of melancholic ending. Maybe I will find a map of Asia in my stocking to tack to the wall and distract me from thoughts of Europa.