In 2013, my friend John and I set out to cycle from Istanbul to Kazakhstan, a shade less than 4,000 kilometers, in two months time, and in the depth of winter. Through geographies sensible ( snow bound mountain ranges, ancient rivers and inland seas ) and not ( jigsaw borders and boundaries fortified in bureaucracy ), we moved east from the edge of Europe to the center of Asia. We relied on the generosity of peoples of steppe, desert, and mountain, as well as scattered expats and the high tide traces of the great Russian and Soviet empires.

“There is cleaning to be done. The bags have to emptied out and packed anew, breaking set habits; calls need to be made and arrangements confirmed. A bag of trash consolidated and fuel shuttled off, and all things separated and divorced from their expedition-spun meanings. The goal needs to be put to bed, silenced, zip-tied to shattering conclusion.

But that is tomorrow. Tonight, those thoughts flutter, but forwards is balanced with backwards and the reel of recognition has begun to play. What might not have seemed real that morning, or the many mornings before, has come to pass. The trip is over, you did it, you’re finished. All the structures and efforts up to this point tomorrow break down and their meaning fades.

Last camps are places of rushed preparation, for reentry into that more harsh environment, but also of last quiet, last meal (if you planned right), and last untroubled laughter. The subtle temperature fluctuation that in a few days time you just won’t notice anymore. The empty food bag, and the empty fuel bottle; the full memory card. The last camp is the pivot on which the experience turns, from internal to external; you will lose yourself tomorrow, so today, look at the peaks around you, at the river current folding gently around the bend, at the tanned cheeks and dirty hair of those who lifted to this point.

We revere last camps each time they come, and so we set up just upstream, just up valley, half-afraid of the trailhead or take-out, of what it will bring to us and our team. These points come in succession and mark our real ending, in golden light.” 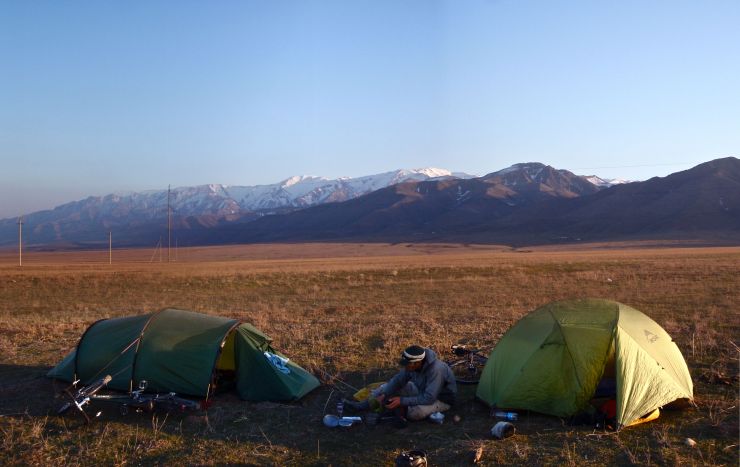